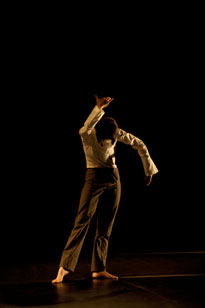 Human relationships, even the most robust, are a delicate choreography danced across ever-shifting grounds. In our tentative steps towards one another, the foundations of connection are laid, structures are created; edifices are built up and collapse and are replaced with others. In creative relationships too – as collaborators Ros Warby, Helen Mountfort and Margie Medlin know well after 20-plus years of working successfully together. Their new work, Tower Suites, explores these subtle but powerful personal forces, with the added contribution of Australian–Indonesian musician and performer Ria Soemardjo.

The seamless interlacing of Ros Warby’s precise and intimate dance, Margie Medlin’s design and projections and Helen Mountfort’s haunting cello has evolved, says Warby, from working in rehearsal over long periods, over two decades; both on the floor together and solo, to establish the direction of each of their works. The motivation for her new work, Tower Suites, she says, was not so much a theme or idea as the desire to create a work together with Ria Soemardjo, who Helen Mountfort has worked with previously but who had not worked with the Warby/Mountfort/Medlin creative team.

“The tenor and conceptual ideas for Tower Suites simply grew out of our initial work together in the studio,” says Warby. “We developed small musical pieces, if you like – hence the term ‘Suites’.”

“The work is a series of suites, that frame the trio in relationship to one another. The composition of the work feels more musically driven than theatrically; and due the to the delicate nature of the work we were producing I became interested in the subtleties of relationship and noticing how they play out on both macro and microscopic levels – how this plays out in settings and eras such as Royal Courts, or modern relationships.”

“We build our lives around our perceptions of each other and the world,” says Warby. As the work developed, “the rhythms of creation and collapse on both intimate and large-scale levels” became more and more theatrically and musically interesting to her; and in particular, “the most subtle of nuances between people communicating”.

“We never usually notice [these nuances] as we communicate, but they are there. Small differences in power, experience, curiosity, intelligence, knowledge, humour, instinct, trust, history. [I] just take the time to notice them and play them out and frame them, in a way that elevates or potentially illuminates our experience of how we relate.”

Woven into Tower Suites are Margie Medlin’s scale-defying film images of Warby – who seems to cross the borders into and out of the physical set itself – as well as found footage of buildings, rising and collapsing behind the shifting relationships of the performers. While images of cascading masonry might bring ‘twin towers’ references to mind, Warby explains that Tower Suites is about more subtle events.

“Certainly these events are embedded in our systems and psyches already. The work is not supposed to be weighed down with these references, but rather allows them to be there in the context of our day-to-day lives; and perhaps reminds us how we relate – to each other and the world we live in.”

The notion of a work based on its creators’ relationships to each other, rather than a predetermined theme, suggests something about life too: while we tend to remember past events ahead of the emotional terrain that seeded them, it is often the connections we make, and their specific qualities, that determine the course of our thoughts and experiences. The collaboration with Mountfort and Medlin, Warby says, while long-standing and a cornerstone in each of their individual practices, is ultimately something that has evolved, and evolves, from simple interactions.

“We began in very small ways: small, intimate duets with Helen in odd little spaces, for instance. Taking things one step at a time. [We] always worked when we had the energy and drive to make something new. It was never about the realisation of an idea or concept, rather [it was] an interest in how we work, what we make together as a team, and the potential of that.”

“In a way each of our contributions is elevated by the existence of the other. The presence of each other’s work inspires the other to create something that would otherwise not be there.”

Both Warby and Mountfort have wanted for some time to collaborate with musician Ria Soemardjo: Mountfort and Soemardjo have worked together for many years in the Indian–Javanese–classical influenced local trio Fine Blue Thread, with tabla player Sam Evans.

“It has always been clear to Helen and myself that working with Ria would have a lot of potential. [In Tower Suites] she brings a stillness, a calm and an evocative sound and presence that gives new dimension to what Helen and I create together.”

Previous Warby works such as Monumental and Swift are testament to the collaborative strength and deep creative connection of her team. As their fifth major work together, the world premiere of Tower Suites will certainly be another work of choreographic, visual and musical depth and richness.